Electronic Dance Music, or better known as EDM has dominated the club and party scene for years. EDM is not a genre in and of itself, but rather an umbrella term for electronically produced music of many different styles. It can encompass everything from dance beats to ambient, chill-out music. The only similarities between the different styles of EDM are how they are produced and their technical elements. Many styles of EDM use bass synthesizers, drum machines and other inorganic sounds. These elements characterize EDM as a whole.

EDM emerged in the mid-1980s as music technology became readily available for artists to use. It expanded internationally in the 90s and has continued to grow into a wide array of genres and subgenres. These genres evolve continuously as DJs and producers blend, remix, and rehash different sounds into new combinations.

As a new DJ starting out, you might wonder which genre you should work with or where to even begin. This handy guide will walk you through some of the most popular EDM subgenres and give you an overview of the history, sound, influences, and popular artists of each genre.

House music originated in Chicago’s underground club scene in the early to mid-1980s. DJs of the time mixed the soaring 70s disco vocals with synth and electronic production. These new sounds exploded across the country and around the world. Today, it’s one of the most dominant genres of EDM, with many subgenres characterized by their own unique sounds and production styles.

Classic house is characterized by 4/4 kick drum rhythms, funky basslines, and sampled soulful vocals. These sounds are designed to get you up on the floor dancing the night away, and house is still quite popular in clubs. Notable subgenres include acid house, deep house, progressive house, and electro house.

Trance dominated the EDM scene for many years, although it has waned in popularity over the last decade. Originating in the German club scene in the late 80s and early 90s, trance is characterized by soaring melodies, long build-ups, and a slightly faster tempo than House. Tracks are usually instrumental, but can have dreamy, usually female vocals that don’t follow a typical verse-chorus structure.

The mood of trance is usually euphoric, getting its inspiration from and hitting its heyday in the ecstasy-fueled raves of the mid-90s. Light and airy. Its popularity has given way to harder styles in recent years, it’s still easy listening and upbeat to dance to. Trance also has several subgenres, including vocal trance that contains more structured vocals, and psychedelic trance.

Techno was born out of the predominantly African American music scene in Detroit in the mid-80s. Although techno has earlier roots in disco and funk from the 70s. Influenced by Kraftwerk, the four on the floor rhythms of techno, really hit its stride once it made its way overseas. Like house music, techno found a home in European clubs, and in 1988, UK journalist Neil Rushton released a music compilation record titled Techno! (The New Dance Sound of Detroit). From there, “Detroit Techno” was put on the map, becoming a staple of European rave culture for many years.

Primarily instrumental, techno is characterized by pounding beats and a repetitive sound meant to be the base of a DJ’s set, blending seamlessly from one track into the next. Futuristic sounds have always been part of techno’s signature sound and are what set it apart from other genres. It has also given birth to several subgenres and spinoffs, such as digital hardcore, acid techno, and even trance.

Also known as UK Garage (and pronounced ‘Garridge’ like the British pronunciation), Garage developed out of house in Europe in the mid-1990s. The term’s use in the U.S. was coined from the eclectic playlist of New York’s popular gay club “Paradise Garage”. However, the genre itself developed more from its’ UK roots. A faster tempo than house music, the 4/4 beat of the early influences of Garage became too fast to dance to, so DJs dropped every other beat to create “speed garage”, and eventually 2-step Garage.

Garage has other influences in Drum and Bass, Jungle, Hip Hop, and other genres, making it a blend of many different sounds. It’s mostly characterized by syncopated drums with shuffled rhythms and pitch-shifted vocals. The mid-2000s to early 2010s brought about other subgenres and derivative genres, such as dubstep, bassline, and grime.

Speaking of Garage subgenres, Dubstep has become its own notable and popular subgenre to the point it’s essentially a full genre of its own. Dubstep evolved from Garage and 2-step in the early 2000s, slowly increasing in popularity in Europe and beyond up through the later half of the decade. Spreading mainly through the internet, dubstep became a dominant cultural phenomenon in the pop music scene thanks to American artists like Skrillex in the early 2010s. Its’ trademark sounds even made their way into top-charting pop hits.

Defined by its’ characteristic “wobble-bass” and darker tone and rhythms, Dubstep uses a lot of different sounds for complex, layered tracks. There aren’t a lot of vocals involved in most dubstep, with producers sticking mainly to samples they edit nearly beyond recognition. The wildly popular American variety of dubstep has evolved into a subgenre of its own called brostep, but as of 2021 dubstep’s popularity has decreased substantially.

Drum and Bass, often stylized as Drum ‘n’ Bass or simply DnB, originated from the early 90s UK rave scene. Heavily emphasizing—you guessed it, drums and basslines—the genre was influenced by breakbeat and jungle tracks, as well as Jamaican styles such as dub and reggae. DnB reached peak popularity across Europe in the mid to late-90s but started to dwindle towards the start of the new millennium. However, it still has a strong niche audience and core set of artists, and its sound makes for a fantastic dance floor atmosphere.

Syncopation is the name of the game for DnB, with rolling basslines and sampled drum breakbeats making up the core part of its’ sound. The most influential track in DnB history was 1969’s “Amen Brother” by The Winstons. The 7-second-long drum breakbeat known as the “Amen break” has been widely sampled throughout the genre, providing the backbone to its’ sound as a whole. Multiple sampled breakbeats in the same track are common, the artist switching back and forth between them to create complex, syncopated rhythms.  DnB has evolved into multiple subgenres with different tones and conventions, such as darkstep, liquid funk, jump-up, and techstep.

This is by no means an exhaustive list of every genre and subgenre of EDM. The musical landscape of EDM continues to evolve and grow, giving way to new sounds and blends of existing genres until they transform into something new. There are hundreds of styles out there, each just waiting to be discovered. New DJs should listen to many genres and experiment with their own sound to figure out what style of mixing or producing they want to do. You can take the time to craft your own unique sound and style, learning from those who came before. And just have fun with it! You never know, you could help to create the next big sound in EDM.

Want to add a personalized touch to your next set for the perfect, memorable sound? Look no further than our custom DJ Drops. 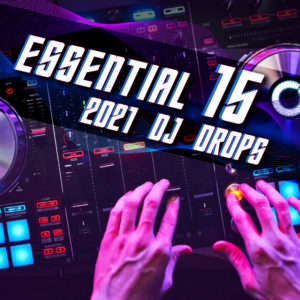 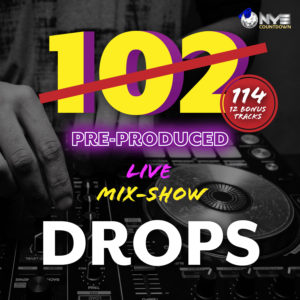 NYE Countdown
5.0
Based on 37 reviews

Titus Touch Entertainment
23:01 21 Jan 21
I was totally awed by the quality and professionalism of my NYE countdown! Absolutely the best drop ever, and will... definitely be using your services again! 🤩🤩🤩🤩🤩read more

Kendrick Thomas
20:53 10 Aug 20
This company bailed me out at the last minute with great quality drops that set my radio off the right way. Great... communication and a quick turnaround. Will be ordering again-ktteev.comread more

Storm Bennett
11:55 26 Jun 20
Absolutely fantastic! From perfect audio and video production to follow-ups and customer service after the sale is... ridiculously refreshing. As a seasoned DJ, it means the world to have NYECOUNTDOWN.com as my GO-TO resource.read more

Peter Fournillier
14:49 03 Jun 20
NYE Countdown are awesome!!!! Their service and quality are out of this world. They are very helpful and very... professional and quick. I will definitely do more business with them ....Keep up the awesomeness NYEread more

Kenny Brown
11:33 27 May 20
The response time was very quick. The customer service was exceptional and my Drop was perfect. They definitely have a... new customer in me.read more

Fernando Gutierrez
18:33 15 May 20
Excellent quality drops. awesome communication with customer service. They listen and understand what you want and are... looking for, as a DJ i didn't know where to get my drops, but now i know where to go from now on. Thanks.read more

Marla Marrs
17:29 11 May 20
I ordered 4 drops and they were fanatic! Jasmin was such a joy to work with. She made sure I received exactly what I... needed/wanted. Thank you, Jasmin!read more 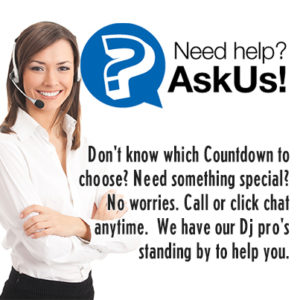